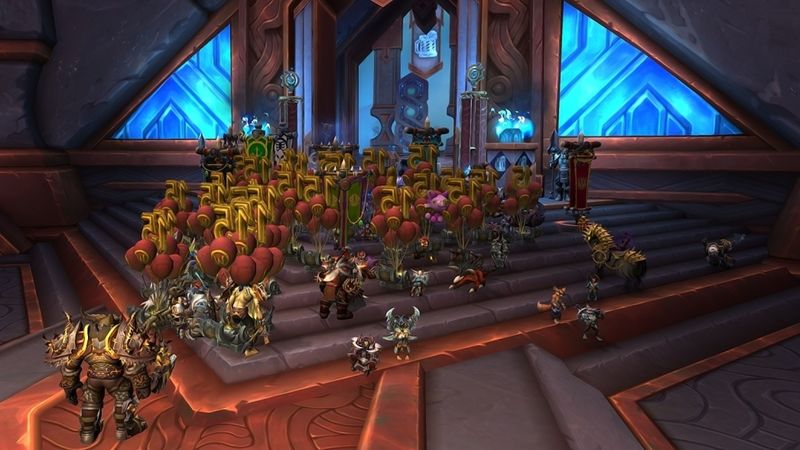 On Tuesday of this week, California’s Department of Fair Employment and Housing filed a lawsuit against game developer and publisher Activision Blizzard citing alleged sexual harassment against female employees. Though Blizzard initially denied these allegations, it hasn’t stopped groups of World of Warcraft players from protesting the company’s work culture in-game. A popular player gathering hub in World of Warcraft’s Shadowlands expansion, the Idyllia Steps of Oribos, has become the site of a mass sit-in as players make their voices heard.

A role-playing guild called Fence Macabre is the organizer of the protests, though the group isn’t content with just sit-ins. As awareness is raised concerning Blizzard’s alleged toxic work culture, Fence Macabre is also working to raise money for Black Girls CODE, a non-profit organization that aims to train 1 million young women of color in science, tech, engineering, and math skills by 2040. In the wake of California’s lawsuit against Activision Blizzard, over $8,000 has been raised for Black Girls CODE, and the fundraiser will continue until July 26.

Several members of other World of Warcraft guilds have shown support for Fence Macabre’s sit-in and have joined the group at Oribos. The protestors state that as members of the World of Warcraft community they are present to “protest the unethical treatment of employees at Activision Blizzard” and want to see “transparent lasting changes to their company and associated IPs.” In order to avoid supporting Blizzard with financial gain during this time, most protestors are “sub-locked,” which means their accounts are running off of pre-paid time.

Thank you everyone who came out to the #OribosSitIn, we could not have anticipated the community response and have raised over 8000$ for @BlackGirlsCode. Our fundraiser, linked in replies, will remain open until Monday July 26th. Our full statement:https://t.co/LMPY3mom6h pic.twitter.com/FywNPjMTNZ

Yet others are cancelling their subscriptions outright and leaving the game. This is a tough decision for many considering World of Warcraft has allowed them to foster friendships and community with people from all backgrounds. But it seems until Blizzard takes action to right the wrongs stated in the lawsuit, determined players are willing to boycott the company. For some, this news is a reminder of 2019’s BlizzCon protests following Blizzard’s controversial suspension and fining of professional Hearthstone player Blitzchung after he voiced support for Hong Kong’s pro-democracy protests.

Activision Blizzard executive Fran Townsend, who was the Homeland Security Advisor to George W. Bush from 2004-2007 and joined Activision in March, sent out a very different kind of email that has some Blizzard employees fuming. pic.twitter.com/BxGeMTuRYF

The latest response to the reports of gender discrimination by Activision Blizzard has come from the company’s president, J. Allen Brack. He has communicated with employees internally via email addressing the “extremely troubling” allegations and calling out discrimination within the company as “completely unacceptable.” He has also stated that all employee claims made will be taken “very seriously.” How all of this will affect Blizzard moving forward remains to be seen, but there is still a long road ahead for California’s lawsuit.