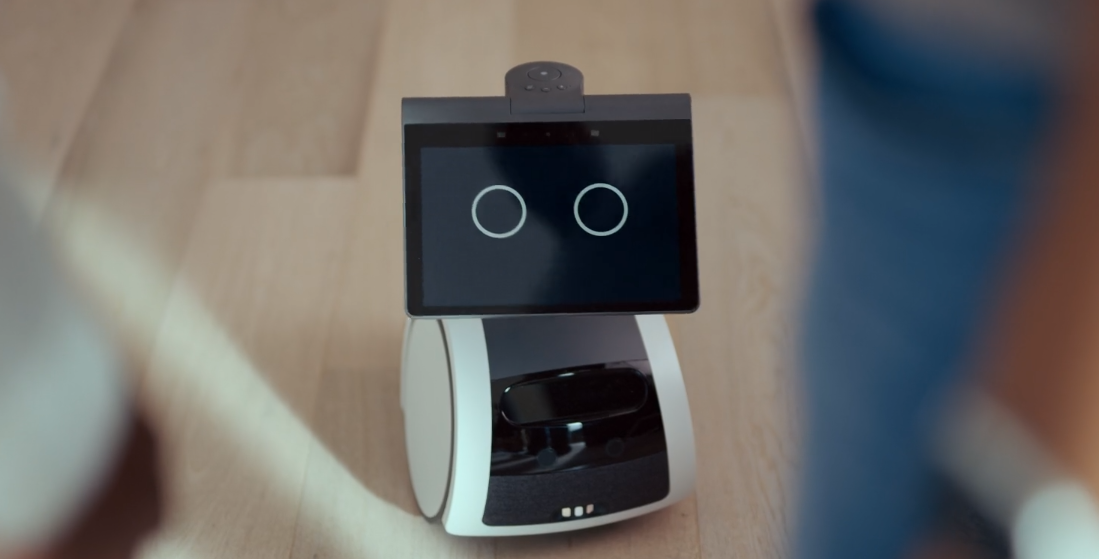 Amazon just unveiled the Astro, a smart home device that resembles a sci-fi droid. The news comes from a recent Amazon event where the company announced a pile of gadgets and security devices, with the Amazon Astro “household robot” able to talk to them all. This 20-pound pet annoyer can recognize faces and has a 10-inch display that will feature a cute little robot face of its own. It can emote, giving it the vibe of a friendly helper or judgey digital informant according to this VICE article.

Once you get past all the winky faces and bleeps and boops, the Astro shares a lot of the same Alexa-driven functionality of an Echo Show tablet, except this one can follow you around the house. You can set reminders, have it play music, and make calls. It also acts as a personal guard bot patrolling your home while you’re away and will notify you of any unsanctioned shenanigans. I’m really hoping it has an angry face to display to ward off intruders.

The three-wheeled spy droid can travel upwards of 3 feet per second. It uses a visual ID that can tell apart different members of a household and can even memorize different rooms. The Astro’s wheels have enough giddy-up to get over cables and should navigate pretty well on a rug. It has a cup holder and can deliver a cold one to a specific person or swap it out for other compatible accessories like a blood pressure monitor, Ziploc container, or a dog treat dispenser.

Security and home monitoring will be the big focus of Astro. It’s integrated with Alexa Guard, an Amazon security feature that uses Alexa microphones to listen for noises when you’re away, so if you have your house wired up the Astro can alert you of break-ins and fires. There’s a periscope camera that can rise as high as 42 inches which you can use to check on a sleeping baby or like in the video, proving to your significant other that you did turn off the stove.

Anyone expecting a pair of little robot arms to sprout from the side to answer the door or taze a burglar, though, will be a bit let down. The Astro is meant to follow, observe and respond to limited commands. Like a puppy. A puppy that can get firmware updates.

The Amazon Astro will cost $999 and come with a six-month trial of Ring Protect Pro for early adopters, but Amazon says the price will at some point go up to $1450 after an “introductory period.” Amazon expects to start shipping these later this year in limited quantities. You can request an invite to purchase one right here.